Raising a glass to creative farming

When it comes to growing our food, novel partnerships are the wave of the future

Every Sunday from January 11 to February 1, we'll be publishing Greenbelt Fund-focused articles by respected journalist Dick Snyder. The four-part series, which will first run in the Toronto Star on the Saturdays preceding our posts, will highlight the diverse and innovative local food successes of our farmers, schools, hospitals, industries, and other Greenbelt Fund partners. In the first of a four-part series, we unearth some groundbreaking local farming innovations supported by the Greenbelt Fund. 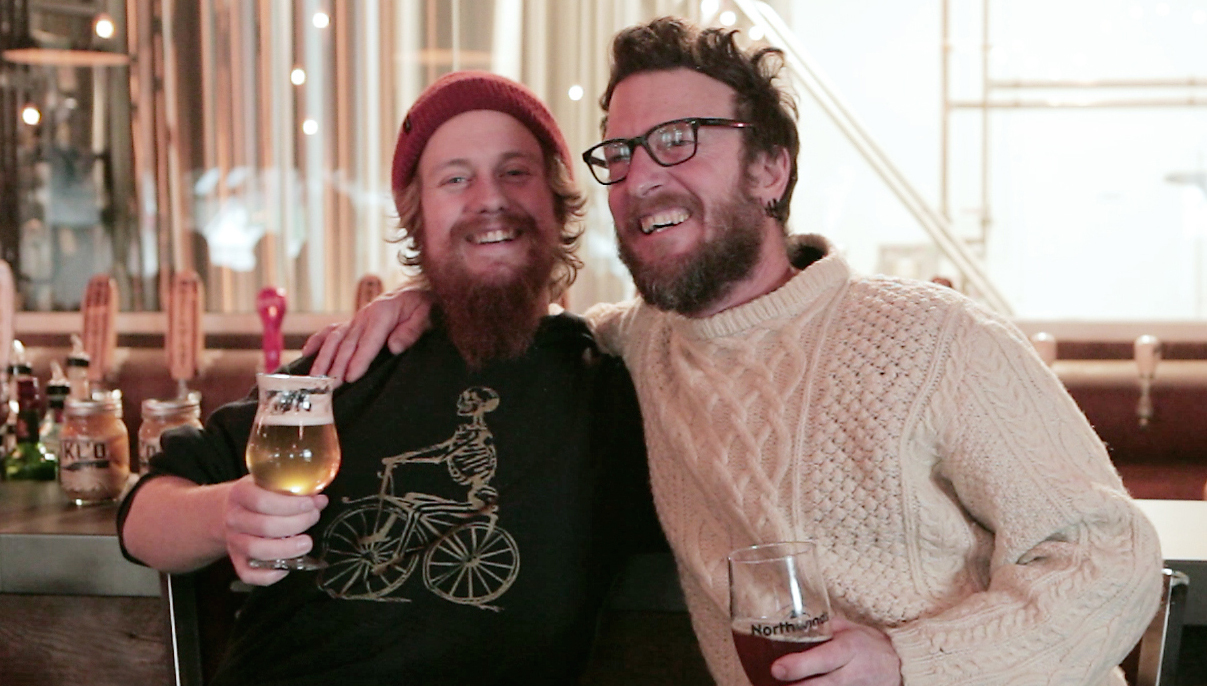 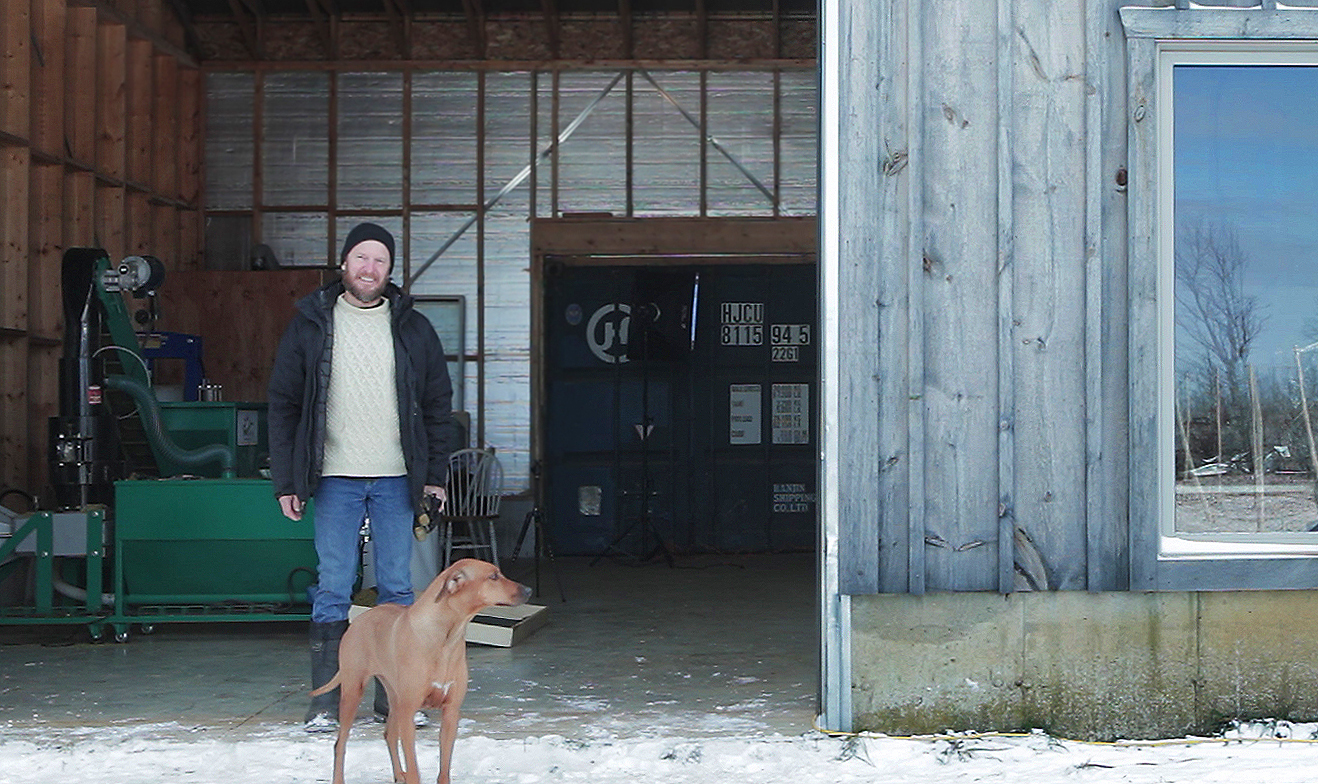 Schaut and his dog Neko in front of their new pellet mill. Photo Credit: Shayne Gray

Nicholas Schaut has been farming in Ontario for more than a decade. He’s grown everything from carrots and potatoes to lettuce and onions—but it’s his latest foray into uncharted fields that has presented his biggest challenge and, potentially, his biggest payoff.

The former Toronto chef and veteran produce grower is not one to opt for the path of least resistance. When he moved his family to Walters Falls in Grey County a few years ago, Schaut started thinking about what to plant, realizing that he needed an edge in an increasingly competitive agricultural sector.

That’s when he got heavily into beer. More specifically, the plant known as hops, which gives beer its essential flavour. That “hoppy” quality can be described as slightly green, herbal or even vegetal—it’s bitter, funky and damn yummy in a tall, cold glass.

“There were already a number of [vegetable] growers up here,” said the founder of Bighead Hops. “And adding to that would hurt everybody. So we were looking at different options, and a family member suggested hops. I became very excited about it as a crop. It's much like growing a vineyard… it takes a great deal of attention and thought.”

Schaut is one of a growing number of Ontario farmers who are finding creative ways to reshape the business of food in the province.  It’s no secret that “local” is the hottest buzzword in food, but being trendy isn’t enough to keep business afloat. Modern farmers need to combine business savvy, green-thumb practicalities, and high-tech prowess, often at an advanced level.

The red-hot craft beer category currently accounts for about 900 brewery jobs, and 3,600 indirect jobs, in Ontario. Local hops growers, all tiny players with less than 12 acres, are supplying more than 53 local breweries. It seems this market has nowhere to go but up. But while Schaut found his edge, he’d landed a supreme challenge to boot.

Getting into hops was, Schaut found out, a costly business. The plants themselves are formidable beasts. They grow on poles and wires trained more than 20 feet high. They are incredibly vigorous, growing 12 inches a day in the peak of summer. Tending them requires specialized equipment—at least two tractors—and a lot of patience. It costs him roughly $15,000 to set up one acre with poles, wires, irrigation and plant stock. “It's easy to put a couple plants in the ground, but it's hard to do the other side [processing and production]. That's my caution to many growers.”

He discovered that, in order to get his hops to market, he needed to meet the demands of the brewers. In short, he needed a pellet mill, a sophisticated piece of machinery that processes raw hops into compact pellets that can be easily added to a brew.

The costs to set up a full processing facility can run $200,000. Schaut was explaining this to a friend in the industry who suggested he apply for a grant supported by the Ontario Ministry of Agriculture, Food and Rural Affairs through the Greenbelt Fund. By helping Ontario’s farmers access new markets, the Fund is increasing the amount of local food purchased in the province. (Visit greenbeltfund.ca for more information.)

Schaut received a $42,500 Greenbelt Fund grant to help buy the pelletizer. In his application, he proposed a co-processing model to allow other hops growers to access the production equipment—which they could never afford to purchase on their own—and thus open up a new commercial market to these smaller players.

As the founder of the Ontario Association of Hops Growers, he knew that overcoming this hurdle would allow other farmers to grow, assured in the knowledge that they would have access to a secure market. Creating a central processing hub was the first step. “We put a lot of thought into it and talked to other growers, and everyone said it’s a no-brainer.”

As soon as the new facility was up and running, Beau’s brewery from Vankleek Hill in the Ottawa Valley reached out and is now one of Schaut’s main customers. He’s since added Quebec brewpub chain Les 3 Brasseurs, as well as local craft brewers such as Burlington’s Nicklebrook, Toronto’s Junction Brewery, Hanover’s MacLean’s and Owen Sound’s Kilannan, as well as his own local, Northwinds Brewhouse in Collingwood.

At 10 acres, Bighead is the biggest organic hops grower in Canada. But Schaut still has a ways to go. His wife currently works “off-farm” to help support their two children. “We need around 20 acres to support a full family,” he said. That’s still a far cry from operations in the U.S., some of which cover 1200 acres. But Schaut continues to aim high. Five Ontario hop farms and one from Quebec have joined forces with Bighead.

“By working together and more collaboratively with the other growers, they can expand acreage and we can too…. And in a nutshell, what the Greenbelt Fund has done for us is open up a doorway and that has allowed us to grow forward.”

Click here to see the significant economic benefits a high-tech pellet mill is bringing to Bighead Hops and other Ontario hops growers.