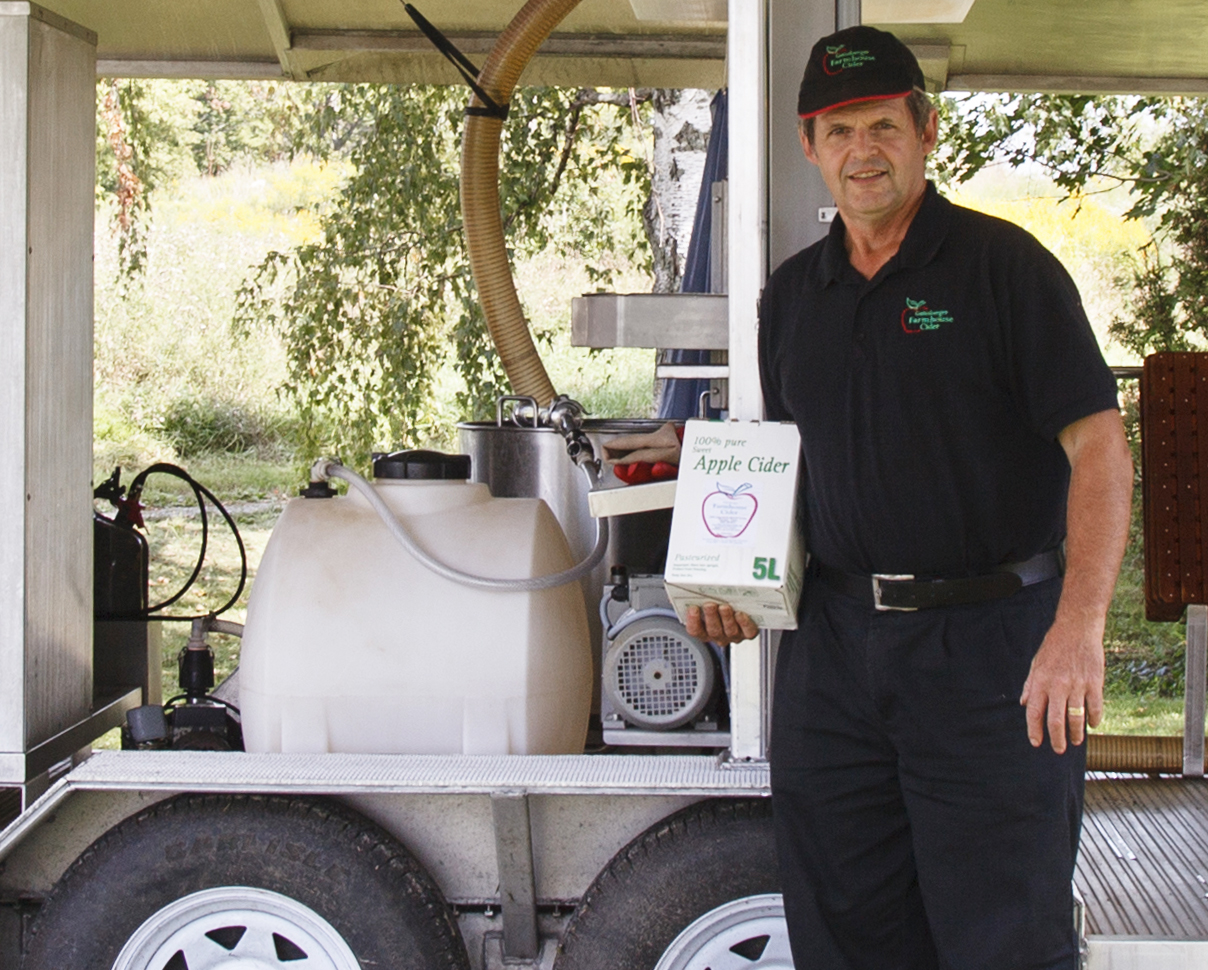 Garry Geissberger takes his mobile cider mill to farms all over Ontario.

For consumers and farmers, “buying local” brings clear benefits around health, social, economic and environmental concerns. For two Southern Ontario farms, both generations-old family operations, thriving in today’s competitive food-production environment required a re-think of their business models from the ground (or the field) on up. Here’s how their radical thinking paid off.

Third-generation Cohn Family Farms in Bradford, Ont., are operated today by Larry and Keith Cohn and their sons Jeff and Brandon. They specialize in potatoes, carrots and onions, sourcing from both their own two farm properties and also surrounding farms in the Greenbelt.

Around 2010, the Cohns began to contemplate a new challenge: how to get more Ontario produce into institutions like hospitals, government facilities, and schools. Most institutions require a certain amount of processing—washing, peeling, portioning—in the products delivered to their doors. Smaller farms can’t afford the equipment required to meet these standards, and so they hit a wall in terms of growth potential.

Realizing this dilemma, the Cohns approached the Greenbelt Fund with a proposal to create a co-packing line that would allow smaller farms access to state-of-the-art processing technologies, opening up a whole new market.  At the same time, the Cohns realized economic and environmental benefits of redesigning their processing systems. By increasing the number of farms they would source from, they could ensure the trucks leaving their facility would carry full loads, thus reducing the number of partial deliveries. They also purchased a German-built high-tech waterless potato peeler, which reduced their water use by 40,000 litres a day.

The Cohns have become a one-stop shop in Bradford, meaning food service companies can have all their produce needs serviced by one point of contact. One purchase order means less tracking and administration costs, which makes the entire ordering process more efficient. “Between what we save with the environment and the water, and taking full trucks off the road… it’s a win-win all the way around,” said Larry Cohn.

Since the 1960s, the Geissberger family has been the go-to for Durham region apple farmers looking to turn their crop into fresh-pressed cider. Their farm in Clarington had the region’s only cider mill, a custom-made rig built by Swiss immigrant Hans Geissberger and his cousin using found parts and the hydraulic cylinder from a 1930s dump truck.

In 2011, Garry and Gord Geissberger, grandsons of Hans, realized that the original cider mill was on its last legs. They set about designing a business plan for the future, centred on acquiring a new mill and processing facility. They ended up with a cider mill on wheels, custom-built in British Columbia using Austrian technology. They hit the road with their new rig in fall of 2012, and have since visited dozens of apple orchards across the province, bringing a brand-new revenue stream to smaller farms that had never before processed their apples into cider.

“With the old mill, we always had farms come to us. Maybe three or four other orchards would come by,” Garry Geissberger said. “But one orchard was 45 minutes a way, he'd drop [the apples] off, go home, come back for the cider… and he'd do it several times. And he only had so much refrigeration space, and would have to freeze it.” All of this used up tremendous time, fuel and energy, says Geissberger.

The mobile unit can turn 20 bushels of apples into 500 litres of juice in about an hour. The juice is packaged using bag-in-a-box technology that requires no refrigeration and can last a year unopened. According to Gord, the economic impact on small farms is profound. Their apples used to be worth about eight cents a pound on the market. “But now they can carry their own line of apple cider, and after our fees, for those same apples, they’re getting 40 to 50 cents per pound,” said Geissberger. “So it's a big benefit. It gives them another revenue stream, and brings people out to the farm.”

The mobile unit cost about $150,000 including a truck and generator. After just two seasons in full operation, the Geissbergers are considering purchasing a second rig—but they’ll need to add some manpower too. “As it is, this thing keeps the two of us busy from September into December.”

When it comes to growing our food, novel partnerships are the wave of the future. Read Bighead Hops' story here.