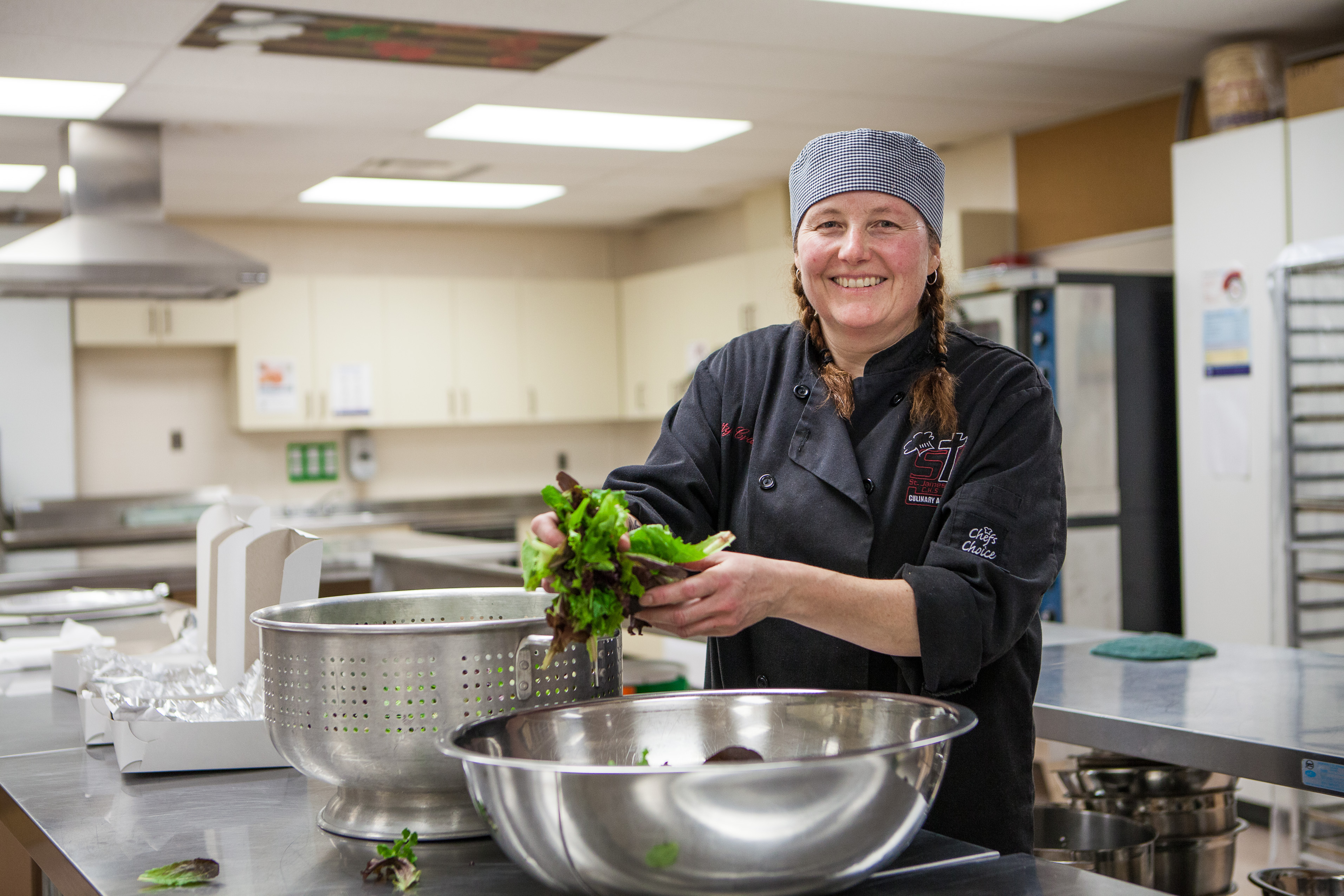 What happens when you give Ontario school kids the choice to eat healthier locally sourced food? This past December, 270 grade sixes from neighbouring elementary schools descended on Guelph’s St. James Catholic High School, home of a groundbreaking local-food-focused hospitality program, to sample snacks cooked up by the high school’s hospitality students.

For a whole day, the halls of the school rang out with excited children visiting interactive displays about agriculture in Ontario and the Greenbelt, learning how locally sourced food benefits farmers and consumers alike, and eating their little hearts out.

Promoting local food is something of a passion project for St. James, whose catchment straddles the urban neighbourhoods of Guelph and surrounding farmlands, many of which are contained within Ontario’s protected Greenbelt.

It’s due to the foresight of the Ontario government that we even have a Greenbelt to begin with. Today, 10 years after 1.8 million acres of sensitive areas and farmland were protected by legislation from urban development, we’re able to look back at the tremendous economic, environmental and agricultural benefits of that decision.

The protected lands in and around Ontario’s Golden Horseshoe make up the world’s largest protected greenbelt. (The total area is larger than P.E.I.) Mind you, the Greenbelt is no mere nature preserve. Since 2005, it’s been the primary catalyst for change in how and what we eat, what farmers grow and how they get their produce to market, and how the food industry distributes and promotes local ingredients. The Greenbelt provides $9.1 billion in economic benefits and 161,000 jobs.

At the St. James school, Yawney and his staff are shaping a legion of school kids who are connecting to their food in a profound way as they learn about the implications of their eating decisions. Their breakfast snack project has the potential to touch thousands of kids and drive many more thousands of dollars in revenue for Ontario farms — and it’s the result of just one $15,000 grant from the Greenbelt Fund.

“We already have a robust hospitality and catering program,” said principal Timothy Yawney, “and this is just another step in terms of taking a local initiative with local foods.” It wouldn’t have happened at all, he says, without the support of the Greenbelt Fund.

Founded in 2010 with support from the Ontario Ministry of Agriculture, Food, and Rural Affairs, the Greenbelt Fund is aimed specifically at boosting local food sales in Ontario, especially in the broader public sector, by funding innovative projects such as the one at St. James.

To date, more than $8 million has been granted, resulting in about $63 million in increased sales of Ontario-grown food. That’s an astonishing return of more than $7 for every dollar invested.

“Breakfast snacks being provided (at some schools) are not very nutritious and are often high in sugar and fat,” said hospitality teacher Mary Weiler. “And we wanted to provide fresher, more nutritious and locally sourced snacks.”

She saw the opportunity to build a curriculum around the Greenbelt’s annual Local Food Challenge, which supports efforts to increase access to local foods in hospitals, long-term care facilities, universities, colleges and school boards. Her students range far beyond recipe development and cooking to investigate economic, environmental and health benefits of going local.

The December tasting event was a showcase to get the young students hooked on healthy, fresh food grown by Ontario and Greenbelt farmers. At the end of the day, the elementary school kids left with full bellies, a recipe book, a Greenbelt T-shirt and fresh insights into just how good school food can be when it’s sourced locally, cooked from scratch and served up with pride and care.

“We’re working against the grocery store model,” said Yawney, who has it in for the store-bought processed foods like granola bars, non-seasonal imported produce, fruit chews and crackers that can be the snack of choice for teachers lacking the resources, time or skills to consider alternatives. Starting next month, the kids at St. James will prepare daily snacks and ship them out to elementary schools that sign on for their program.

For Yawney, the take-away is clear: Give kids options and education, and they make their own choices. When local food makes sense to them, they embrace it. And that’s where it all comes back to the Greenbelt. Ontario farmers and their communities benefit when consumers vote with their bellies — and the bellies are happier too.

Soni Craik knows this first-hand. She’s the School Fund Program Manager for EcoSource, a non-profit based in the Region of Peel that has been a pioneer in local food education. Way back in 2006, with the support of a Greenbelt grant, the group conducted an audit of local food in elementary schools.

“What we found was that a lot of product was being made in Ontario for local schools, but (the ingredients) weren’t coming from Ontario,” she said. “We were looking at piloting different options to get education into the classroom and to get students out . . . for more experiential visits to farms.”

It was important, says Craik, that the lessons in the classroom were supported by real decisions in the schools. Then, in 2010, the Ontario government effectively banned junk food in schools, with strict limits on fat, sugar and salt, and the elimination of caffeine and deep fryers. School boards were fearful that students would abandon cafeterias all together and set out for nearby fast food joints.

“It was a well-founded fear,” said Craik, but she knew that awareness and education could change behaviour. EcoSource proposed to partner with the Peel board and their food-service contractor, Compass Group Canada, to develop a local food buying policy and get more healthy lunch and snack options into school cafeterias.

This was more radical than it sounds. For Compass — one of the biggest food service providers in North America — it was the first time they’d partnered with a non-profit in Ontario. Peel became the first Ontario school board to even attempt to develop such a policy. More radical still, they wanted to put the end user —the students — front and centre in the process.

EcoSource received a Greenbelt Fund grant to engage more than 11,700 students in local food events and education, while cafeteria staff was educated in cooking with local ingredients. “We ran a board-wide cooking contest . . . and those winning recipes were carried in Peel cafeterias. It was the first time Compass had worked with student-designed menu items.”

This collaborative approach got the attention of other school boards. In 2013, EcoSource received a Greenbelt Fund grant to partner with Compass and the Durham District School Board on the Cafeteria Connects program. The basic goal was to get more local food into Durham schools. At the same time, they would weave local food education into the curriculum for business, science, hospitality, geography and family studies.

That same year, the Ontario legislature passed the Local Food Act, a set of priorities designed to support farmers and increase awareness of the health and economic benefits of eating more Ontario-grown food. The act set targets for public sector organizations — targets that will be publicly reported. Consider the math: If the nearly 1,500 public institutions in Ontario boost their local food purchases to 25 per cent, the benefit to the local food economy is about $200 million.

One of the results of the Cafeteria Connects program is that 16 lesson plans have been created and these will be released to teachers this month. Craik says the transformation in student attitudes to local food is tangible. Their reaction to Ontario tofu was most surprising. “We used it for tacos and hosted Ontario Taco Day. Students were tentative, but then they tasted it. We had football players coming back for a tenth taste! The next day in the cafeteria, we had massive sales.”

The support of the Greenbelt Fund, says Craik, has been particularly vital in helping to connect all the dots in the complex arena of local food buying.

“It’s very impressive what (the Greenbelt has) done to take a policy focused (Local Food) act and bring it to how it can really affect Ontario agriculture. They’ve done a great job to make it tangible and something that does impact the economy and change purchasing practices.

“They’ve brought it to life, and that’s an amazing thing.”

Food activist Joshna Maharaj says delicious Ontario-grown food is waiting for you—all you have to do is ask. Read Joshna's Story Here.