No pickle goes to waste at Sunshine Farms

By Jane Robinson for Food in Canada

A small, family-run food business in southwestern Ontario has found a way to diversify their unique line of locally-grown organic pickles and divert food loss in the process.

Adrian Jaques is general manager at Sunshine Farms — a family operation in Thamesville, Ont. that’s been growing asparagus and cucumbers for the fresh and processing market for 35 years. Like many small, innovative food businesses, Sunshine Farms depends on reading customer demand for the products they grow, process and move to market. 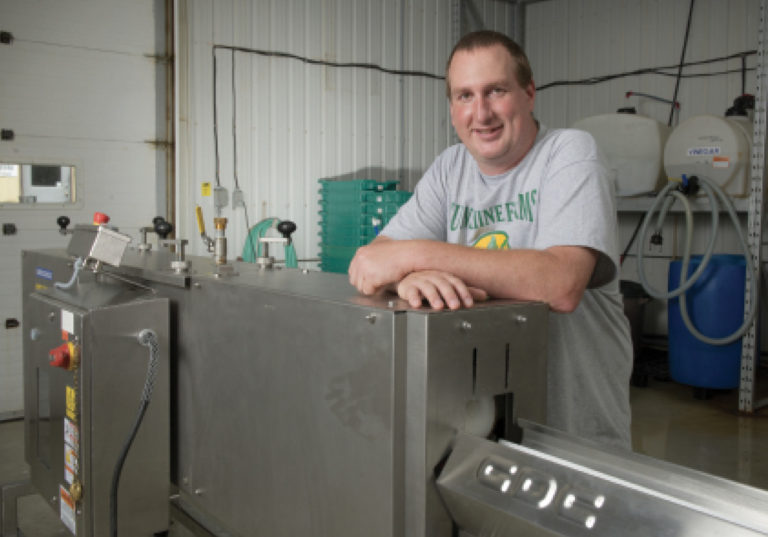 When Adrian’s parents Claudia and John started the business, they were growing and selling fresh asparagus to food processors in Ontario. It was a good business. When the North American Free Trade Agreement came to be in 1986, there were 12 Canadian processors (eight in Ontario), and prospects looked bright for the asparagus they were growing for the processing market.

But it didn’t take long before the bottom fell out of the processing market in the province, and when all the processors closed down, they saw the writing on the wall. “There was a lot of asparagus grown in Ontario at the time, and without any further processing businesses left in the province, we knew fresh product would be flooding the market, and prices would drop,” says Jaques.

That was all the impetus they needed to start their on-farm processing business. “We tried freezing, dehydrating and pickling our asparagus, and pickling worked the best.”

In the 25 years since those first pickled jars came off the line at Sunshine Farms, the Jaques family has built a high-quality, well-established brand of pickled asparagus and added organic pickled cucumbers about 15 years ago. Their product line includes organic pickled beets, beans, garlic and jalapenos on top of the asparagus and cucumber products with processing fluctuating with demand.

They carved out a niche with the early decision to serve the organic market with their pickled cucumbers, based on consultations with their retail customers. “My parents took a cross country tour to Western Canada to talk with large retail customers about how things were going and identify anything the market was lacking.”

“The west continues to be our biggest customer with 70 per cent of our sales there. Previously, 90 per cent of our product went to the west,” says Jaques. “Western stores were already focused on customer-driven product decisions — if the customer said they wanted a product, stores would go get it.” That approach helped launch the pickled cucumber business. “Ontario wasn’t as driven by customer demands at the time, but our sales are continuing to grow in Ontario with independent stores, Loblaws, some Sobey stores.”

While Sunshine Farms entered the organic pickle market early — and continue to be the only certified organic pickle producer in Canada — their initial market research didn’t touch on the price consumers would pay for the new product. “Organic was pretty new then,” says Jaques. “People wanted it but didn’t want to pay the premium. That’s shifted now, and people who want our organic pickles are happy to pay a premium price.”

As the next generation of Jaques began managing the business, the same consumer-driven approach to product development has carried on. “We were making mostly whole pickles and when we talked to the retailers at trade shows and industry events that we’re selling our products and they said their customers were looking for pre-cut products like sandwich pickles (sliced) and pickle spears.”

“We had been looking at slicer equipment for quite a few years, trying to justify the cost. We are a very small family operation and couldn’t support purchasing the new equipment without assistance because of the risk that the demand for sliced products might not match our projections. We applied to the Greenbelt Fund so we could expand to meet our customer demand for locally grown, sliced organic pickles, and were very thankful to receive about 30 per cent of the equipment cost from the fund.”

With the $30,000 investment from the Greenbelt Fund to purchase a slicer, Sunshine Farms projects sales of sliced organic pickles to bring in an additional $200,000 annually.

The new slicer equipment is streamlining the production of sliced products and delivering some additional benefits too. “We always knew if we got the slicer, we would probably be able to find other ways to use it,” says Jaques. Cucumbers that had been too large for whole pickles could now be salvaged from the food loss stream and sliced or speared into their new pickle line.

Jaques and his father travelled to the U.S. to get firsthand training from the manufacturer. “And before we bought the machine, we did trials with it to be sure it was the right fit and were also trained on proper cleaning techniques and other uses.”

The new slicer arrived on-farm at the end of the 2018 cucumber season and they were able to use it to make the first small batches of their Sunshine pickle slices and spears. “We’ve sent jars out to a number of customers and will continue to sample it at trade shows.”

An added business benefit of the new slicer is the new life it’s bringing to previously discarded cucumbers. In the past, when cucumbers were too large for the organic pickled whole cucumbers, they were discarded. The new slicer offered customers a new product option and provided a new way to process oversize and misshapen produce.

“We do everything we can to reduce food loss because the last thing we want is to see good produce go to waste,” says Jaques. With their new slicer, they found cucumbers that were previously discarded for being too large or misshaped, could be saved from the food loss pile and diverted to making slices or spears.

“We can cut cucumbers that are odd shapes and sizes, and still pickle them — misshapen cucumbers go for slicing, and really misshapen ones go to relish.”

The opportunity to remove food from the loss pile and use it for valuable food products is having traction. Even consumers are learning to love ugly fruit and vegetables. A recent report on food loss by Second Harvest and Value Chain Management International Inc. — “The Avoidable Crisis of Food Waste: The Roadmap” — puts the levels of food loss and waste in Canada at a whopping 58 per cent. That staggering number means that more than half of the food that we can and do produce in Canada… is never consumed. Much of that food loss begins on the farm and at food processing — while an estimated four million Canadians are struggling to access healthy food.

On Sunshine Farms, they are not currently measuring food loss in the field, but they are reducing the product that is left on the processing floor.

“We haven’t factored in the cost of being able to redirect produce to our new organic pickle slices and spears but hoping to calculate that as we get the new slicer and products into a full production year.”

“We are always talking about how to address food loss and the potential product lines we can develop to divert the waste,” says Jaque.

THIS ARTICLE WAS ORIGINALLY PUBLISHED IN THE AUGUST 2019 ISSUE OF FOOD IN CANADA.