The lucky winners of the Brewery Discovery Routes contest have been announced! Robert Arsenault from Stoney Creek won a dinner at Langdon Hall and Annie Chu from Toronto won a 2-night Ontario getaway.

This past summer, the Brewery Discovery Routes invited Ontarians to eat, drink and enjoy local more often and the people of Ontario rose up to the challenge! They sipped and savoured their way through breweries, cideries, distilleries, Feast ON restaurants, farmers’ markets and scenic outlooks across Ontario’s protected Greenbelt. To get a sense for what was sampled search for #brewroutes16 on Instagram and/or Twitter!

First launched in 2015, the 2016 expanded Brewery Discovery Routes included nearly 150 independent craft beverage producers, over 100 Feast ON restaurants and additional points of interest across Ontario and its protected Greenbelt. 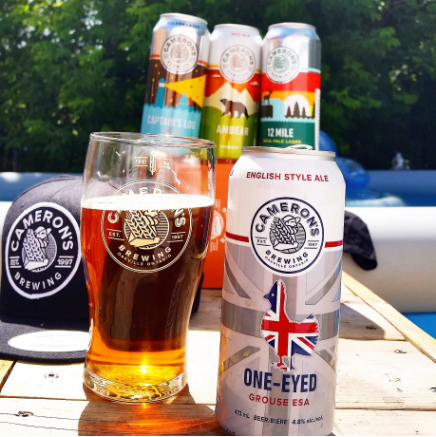 To keep up with the delicious food and beverages enjoyed along the Routes, we asked you to keep track of the places you explored using #BrewRoutes16. The mouth-watering pictures were a real motivation for all of us to get out and explore all that Ontario’s Greenbelt has to offer!

Both Annie and Robert enjoyed their visits to the breweries, cideries, and restaurants, and both remarked that the owners of the establishments along the Brewery Discovery Route are very passionate for the work they are doing and it really shows – from the look and feel of the locations to the delicious craft beers.

Robert visited the Discovery Route #5, which stretches from Mississauga to Grimsby. On the Route, he sampled delicious craft beer from Cameron’s Brewing Company in Oakville and Nickle Brook Brewing Co. in Burlington. At both locations, the owners were very welcoming and engaging with customers, and Robert noted the many different seasonal beers that you can’t get anywhere but at their breweries– Nickel Brook Brewing even has a sour beer made with raspberries grown at Uncle Scott’s Farms in the Greenbelt.

Buying locally crafted beer is important for Robert “because it takes back the beer industry from large conglomerates and helps the local economy by creating jobs”. Drinking craft beer introduced Robert to the story of the people who make the beer. “They use local ingredients, they create local jobs, and bring visibility to the local community” says Robert.

Supporting local production and processing of craft food and drink is also very important to Annie. “With so many different options available to us, people often forget what real food is and what great real food we can get in our own backyards. There are reasons why we have apple and peach seasons. It feels right to be connected to what we grow, and to be eating food that is not only good for our bodies, but also good for our land and economies” says Annie.

Congratulations to both winners, and we hope everyone who enjoyed a trip on a Brewery Discovery Route will continue to share their experiences.

At almost 2 million acres, Ontario’s protected Greenbelt offers many options to explore the Greenbelt. Don’t forget you can still get out and explore the many itineraries of the Brewery Discovery Route all year long.