Spend a Summer Weekend on a Brewery Discovery Route

Brewery Discovery Routes are the perfect summer adventure, taking you on a tour of Ontario's craft breweries and restaurants showcasing local food and beer. The self-guided routes explore Ontario's countryside and the communities that our favourite brewers call home.

In Ontario, we're lucky to have 140 operating breweries and another 50 contract brewers, offering more than 450 handcrafted premium beers to enjoy. From pilsners to wheat beer, Ontario Craft Brewers have been in the business of promoting craft beer made here in Ontario since 1985.

Brewery Discovery Routes launched in 2015, and this year expanded to include 5 curated self-guided tours of craft breweries, cideries and distillers, along with local artisanal cheeses, restaurants, farmers' markets and more. With more and more craft breweries popping up across Ontario and its protected Greenbelt, there is no reason to taste the difference that local makes!

Choosing local more often means supporting Ontario's economy. More than 5,600 people are employed in Ontario's craft brewing industry and add to the more than $600 million economic impact of craft brewing. It's not just the brewers you're supporting, but also the farmers who grow hops across Ontario, favoured by many craft brewers. 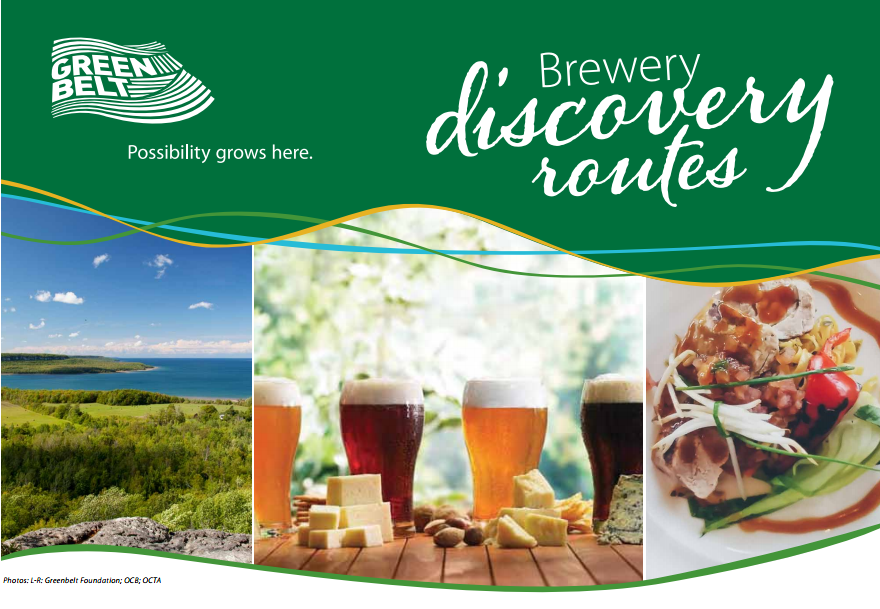 The five Discovery Routes each offer something special:

Saints & Sinners: Bootleggers' Run Trail map is your passport to beer, wine and cider producers around south Georgian Bay. The area was once a hotbed for bootleggers during Prohibition. Today, it boasts imaginative producers who use local hops, apples and grapes to create award-winning products.

Barrels Bottles & Brews Trail: As the birthplace of whisky in Canada, the tradition continues today with a new generation of craft brewers and distillers. Learn about the history of Canadian Prohibition and whisky as you experience the Barrels Bottles & Brews Trail. Enjoy a flight of craft beer or small batch ultra-premium spirits in Ontario's beautiful western peninsula.

Each of the routes offers a unique getaway to enjoy local food and drink this summer. Post your favourite photos from your trip to Instagram or Twitter with the hashtag #BrewRoutes16 for a chance to win two nights at a B&B with dinners for 2 at FeastON restaurant and an all-inclusive tour of your choice.

Find out more at brewerydiscoveryroutes.ca.

While sampling is part of any brewery tour, participants are reminded to drink responsibly and establish a designated driver if touring the Discovery Routes by car. Most breweries, cideries and distilleries have bottle shops on site so visitors can take their favourite craft beverage home with them to enjoy.